Welcome to our comprehensive review of an electric fireplace with mantel. the SEI Elkmont FA9282E.

Spoiler Alert: We really like this decorative fireplace which is manufactured by Southern Enterprise Inc; a large furniture manufacturer. It is very stylish and there is great attention to detail on the cabinet. We really like the firebox which is quite nice and, in fact, has become a standard and is used in a number of their models. If you like the fashionable look, this may be the one for you.

It is a pleasure to bring you this Elkmont Electric Fireplace Salem Antique Oak review. We pride ourselves on providing honest, comprehensive reviews. This will provide you with all the important information and details that you need to make an informed buying decision. We will bring you all of the important features and benefits of owning this fireplace and also share pros and cons which are summaries from customer reviews left by real owners.

The Elkmont Electric Fireplace is a classic looking piece that will look good in any room. You can install it in your home or office easily and people that visit will comment positively about it. This fireplace has a timeless look that will not disappoint.

This free standing electric fireplace heater accommodates a flat panel TV up to 43.5″ W overall with a base up to 40″ wide.  The mantel can support up to 85 lbs.

The firebox has a burning ember effect and a realistic flame effect which changes every couple of seconds. Both the burning embers and the flame effects can be adjusted using the remote control supplied. There is a down light effect.

This particular fireplace is going for the realistic flame effect of a real fire. There are no fancy colors or light shows. The flames operate independently of the heater.  There is no need for the heater to be operational at the same time as the flame effects.

If you have young children or pets in your home then there is no need to be concerned for their safety as the glass at the front will not get hot. The burning embers and the flickering flames are powered by long life LED’s which are energy efficient and will not need replacement. After you remove the power the burning embers and flames will gradually fade out which is a nice touch.

Heater Function of the Elkmont Electric Fireplace With Mantel

This fireplace features a thermostatically controlled heater which has four adjustment settings to heat your room. With the Elkmont Electric Fireplace all you need to do is to plug it in to a standard 120 volt outlet. The heater has been designed to produce supplemental heat and the fireplace has been tested to heat a 1500 cubic feet room in just 24 minutes.

The fan assisted heater has a maximum output of 5000 BTU’s or 1500 Watts. The heater is energy efficient and will cost around 10 cents per hour to run. The thermostat can be set for 62-82 degrees at 4 degree intervals and the heater will shut off when the temperature is reached. There is also a safety thermal overload protector included. Being an electric heater there is no burning of fossil fuels and no pollutants or emissions.

The limiting factor is the ability of standard household plugs and circuits; not the electric fireplace. Generating more heat requires more electricity than the plug and circuit can handle.

Controls Of The SEI Elkmont

This fireplace is supplied with an infrared full function remote control that will enable you to fully control the fireplace. There is an on / off switch and a four position thermostat adjuster to increase or decrease the heat output. The burning embers and flame intensity can also be adjusted using the remote. Setting the timer is easy with the remote control.

There is a child safety lock which is accessible from the remote.

The overall dimensions of this fireplace are 45.5 inches in width by 14.5 inches in depth and 40 inches in height. The product weighs 102 pounds. The mantel of the fireplace will support up to 85 pounds or a 43.5 inch flat screen TV. There is a 6 feet power cord with the unit and a remote control and an installation manual.

Pros Of The Elkmont Electric Fireplace With Mantel

Many buyers have described the fireplace as “looking great” and it was also described as “beautiful”, “stylish”, “amazing” “fantastic” and “awesome”. One customer felt that the wood look and feel and the bevelled edges were really authentic and made the fireplace stand out from the rest.

Several customers remarked on how realistic the burning embers and flickering flames. The flame effects were described as “very soothing” by some and one person said that the flames were as realistic as you can get without real fire. Another customer said that the simulated fire logs were the best they have ever seen.

“Heat output is good” – there were a lot of comments about how good the heat output was with this fireplace. Others said that the heater was very sufficient to make their rooms cozy and warm. (Refer to the heater review section for heater limitations.)

A lot of purchasers made comments on how easy it was to assemble the unit. Some said that it took just over an hour and others over two hours. The assembly instructions were very helpful said some customers.

There were a few reviews that stated that the fireplace represented good value for money. It was felt that the quality of the fireplace was high and that more expensive units did not offer the same quality.

Cons Of The Elkmont Electric Fireplace With Mantel

We looked very carefully for negative reviews and ‘cons’ in terms of foreplace function and design and found none really. The negative comments and down grades from 4 or 5 stars appear to be one of a kind issues.

“The flames and fan stopped working” – again this was a single incident that happened to one customer. This occurred after two months and the flames would shut off for no reason. No other customers reported a problem like this. With the warranty the unit could have been fixed or replaced.

“Hard to install and not sturdy” – just one customer felt that the unit was difficult to install and when it was installed it didn’t look and feel sturdy. A 60 year old commented on how they assembled the unit alone and felt it was straight forward. This is not considered to be a major issue.

If you are looking for a classic looking fireplace, which even has age distressing features such as imperfection marks and worm holes, then this unit is a good choice. The slate style and arched patterns is very effective. The Elkmont Electric Fireplace is highly recommended. 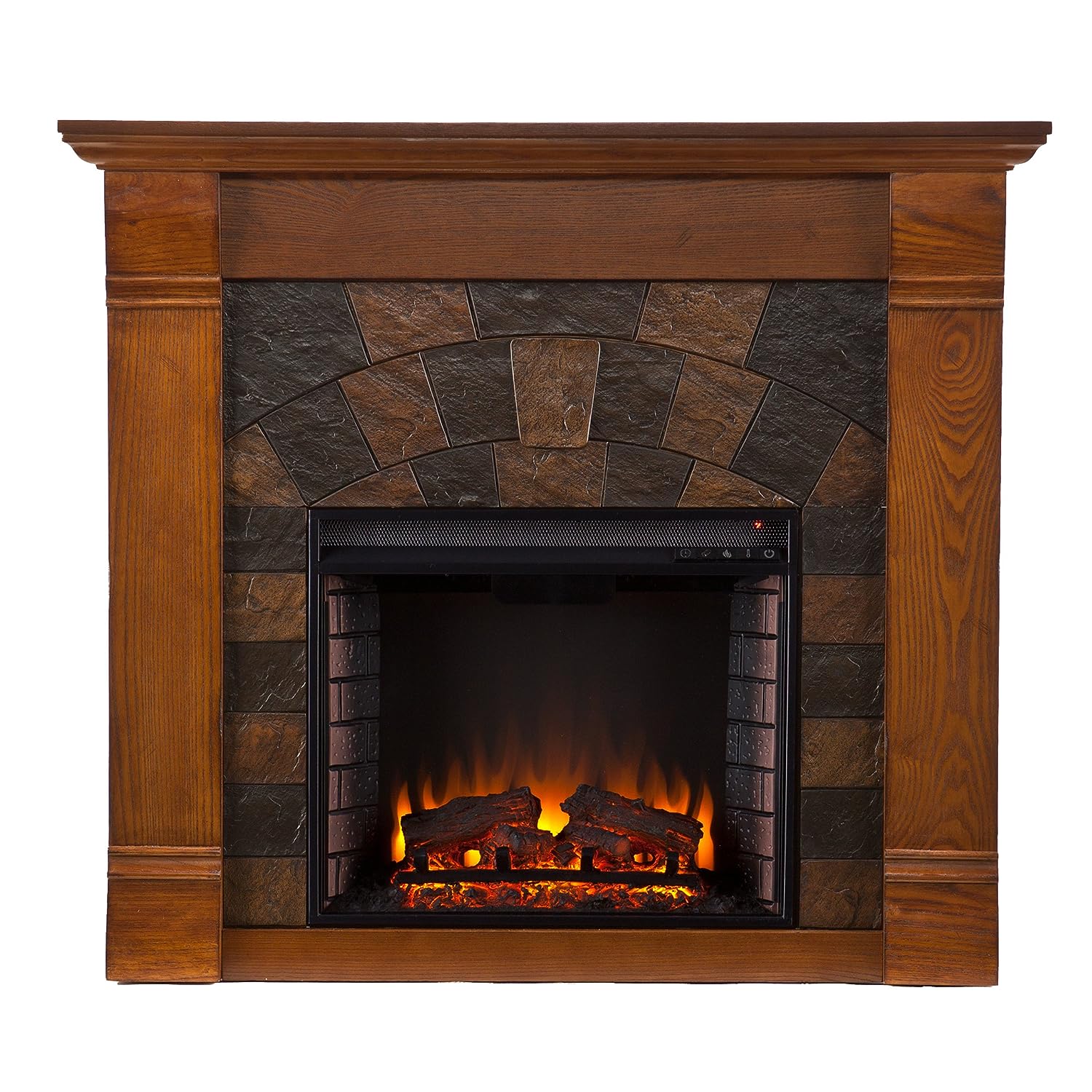 We have completed full, comprehensive reviews on these electric fireplace mantels that are similar in function. They have different styling cues.

Click on the text link for the full review. 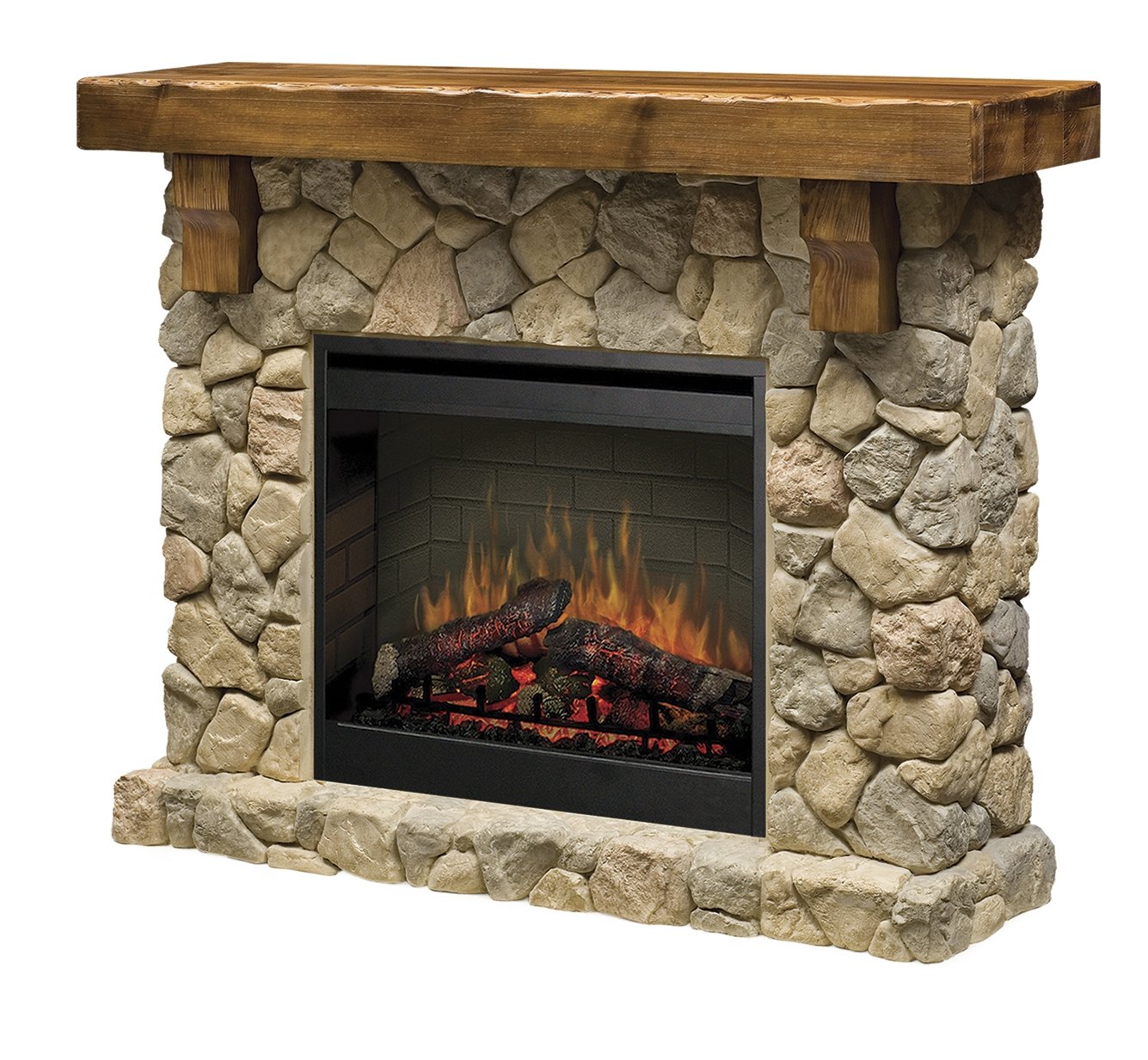 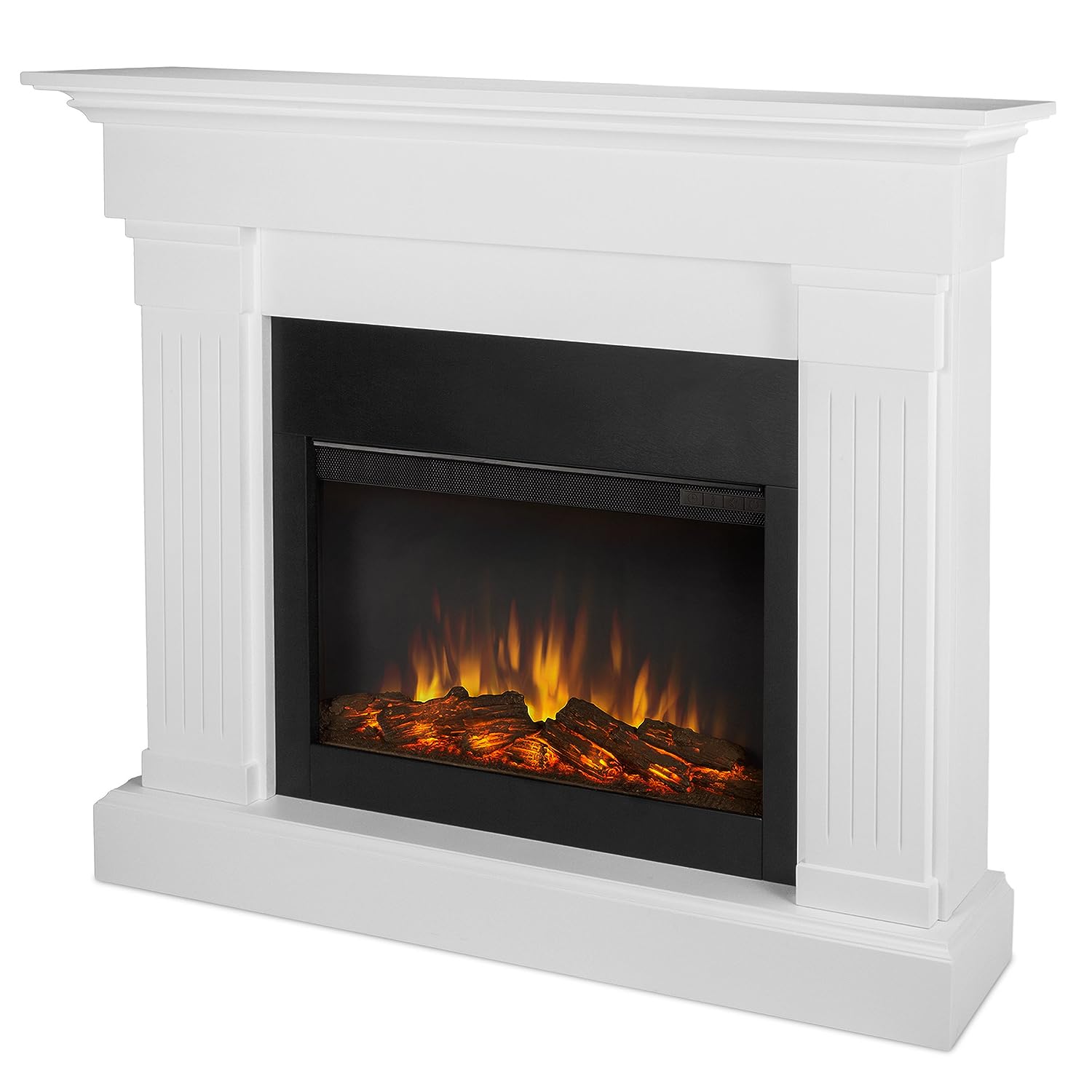 Even More Free Standing Electric Fireplaces With a Mantel