Welcome to our comprehensive review of an electric fireplace with a craved mantel. the SEI Calvert FA9278E.

Spoiler Alert: We really like this decorative fireplace which is manufactured by Southern Enterprise Inc; a large furniture manufacturer. The Elkmont Electric Fireplace is a classic looking piece that will look good in any room. You can install it in your home or office easily and people that visit will comment positively about it. This fireplace has a timeless look that will not disappoint.

It is very stylish and there is great attention to detail on the cabinet.

If you like the look:  ✔️ Check Today’s Discounted Price.

We really like the firebox which is quite nice and, in fact, has become a standard and is used in a number of SEI models. If you like the fashionable look, this may be the one for you.

We pride ourselves on providing honest, comprehensive reviews. This will provide you with all the important information and details that you need to make an informed buying decision. We will bring you all of the important features and benefits of owning this fireplace and also share pros and cons which are summaries from customer reviews left by real owners.

This free standing electric fireplace heater accommodates a flat panel TV up to 42.5″ W overall with a base up to 40″ wide.  The mantel can support up to 85 lbs.

Video View - Check Out The Calvert In Action

In addition to our comprehensive written electric fireplace reviews, we invite you to click through to our YouTube Channel for our video reviews. Each review is brief, about 2 minutes and to the point.

This unit has a very realistic 3D flame effect and there are burning log embers and flickering flames. The intensity of the flickering flames and the burning embers can be adjusted with the infrared remote control to five levels. Energy efficient LED’s are used for the flame effects and these will last for a long time so there should be no need to replace them.

Like most fireboxes used by Southen Enterprises, it is going for the realistic looking flame effect of a real fire. There are no fancy colors or psychedelic light shows. The flames operate independently of the heater.  There is no need for the heater to be operational at the same time as the flame effects.

The flickering flames and burning embers can be turned on without the heater which means that the ambience can be enjoyed even in the summertime.

A good feature of the flame effects is that they will gradually fade out and turn off when the power is removed. The glass panel at the front of the unit will never be hot to the touch which is a great safety feature if you have young children.

The fireplace uses a standard 120 volt standard electrical outlet. The fan assisted heater has a thermostat that can be used to control the heat output. This heater has been tested by the manufacturer and was able to heat a 400 square foot room in around twenty four minutes. It is not intended that this heater be the sole source of heat if you live in a cold climate. The temperature can be set in four intervals between 62° and 82°.

Being an electric heater it is efficient and there are no fumes, emissions or pollutants. With the heater switched on it is estimated that the fireplace will cost approximately 10 cents to operate per hour. The heater can be programmed to switch on and off automatically through the use of the timer function. Safety is a prime concern and the unit includes a thermal overload protector. The heater will output a maximum of 1500 Watts and 5000 BTU’s.

You will be able to control this fireplace unit with the full function infrared remote control that is supplied (you will have to provide the 2 AAA batteries). With the remote you can turn the fireplace on and off and adjust the intensity of the flickering flames and the burning log embers. The heating timer can be set with the remote and the thermostat can also be adjusted in four different positions.

The Calvert Carved Electric fireplace is 40.25 inches high and has a width of 44.5 inches and a depth of 14.5 inches. This fireplace weighs just over 108 pounds. A six feet long power cord is supplied with a standard plug fitted. Also supplied is an installation manual and a remote control. The fireplace mantel has been designed to support a load of up to 85 pounds which means that a 43 inch flat screen TV can be accommodated.

Pros Of The Calvert Electric Fireplace With Mantel

There were a number of customers who said that the fireplace was well made as well as a beautiful addition to their home. Some said that the unit was “very beautiful” and others described it as “gorgeous” and “elegant”. Many people liked the rich color of the espresso finish.

As mentioned previously, the manufacturer Southern Enterprises always goes for a realistic flame effect. There were lots of comments about how real the flame effects looked with this fireplace. The flames were described as “very cozy” by some. The fact that the flames have five adjustment settings was also considered to be a very good feature. Some said that the flames transformed the rooms where the fireplace was situated.

“The heater kept the room warm” – the heater output received a number of positive comments. Most people were very happy with the heat output and said that their rooms were very cosy and heated up quickly. Remember to keep your expectations realistic.

“This is a lot of fireplace for the money” – there were a few comments on the value for money that this fireplace offered. A few people said that it was worth the price and felt that the quality was worthy of a much higher price.

Cons Of The Calvert Electric Fireplace With Mantel

This line of free standing electric fireplace mantels share the same firebox which is of good quality and the fireplaces look good. Most of the negative comments seem to refer to one of a kind problems for the most part, such as damage during shipping or a faulty part. To be fair and honest – we report them here.

“The fireplace does not look the same as in the picture” – one customer was disappointed that the ivory colored fireplace did not match the photograph of it. They said that they were so unhappy that they would have to paint it. They had ordered the Ivory, White version which was discontinued as we wrote this review. This was a one off comment and nobody else stated that they were unhappy with either the ivory or espresso colors.

“So many pieces to install” – the same customer that complained about the color also complained that there were too many pieces to put together. There were a lot of comments about how easy that the fireplace was to install so this is not seen as a problem that should put you off this unit. The degree of difficulty is about the same as assemblin an IKEA book shelf. The fire box is a complete unit and attaches to the frame with a few screws. (See image below).

“The flame effect is noisy” – again an isolated comment. This customer claimed that the firebox was very noisy when the flame effects were switched on. This is seen as a one off incident and this customer was unlucky. A problem such as this will be covered by the warranty.

“Product was damaged during shipping” – this can happen to anybody. The customer reported a couple of broken pieces and had to return the unit for new. Again this is not considered to be a manufacturing or quality problem. The problem was in shipping.

We have completed full, comprehensive reviews on these electric fireplace mantels that are similar in function. They have different styling cues. Click on the text link for the full review. Click on the image for discounted price comparisons.

This is a stylish fireplace that has a lot of good features. The style is traditional but it has a modern feel about it. The realistic 3D flame effects provide a very good ambience. Overall the Calvert Carved Electric Fireplace is a recommended purchase.

The heater is very efficient and silent and the bookshelves are a welcome addition. This fireplace is recommended by us, it really is pretty. 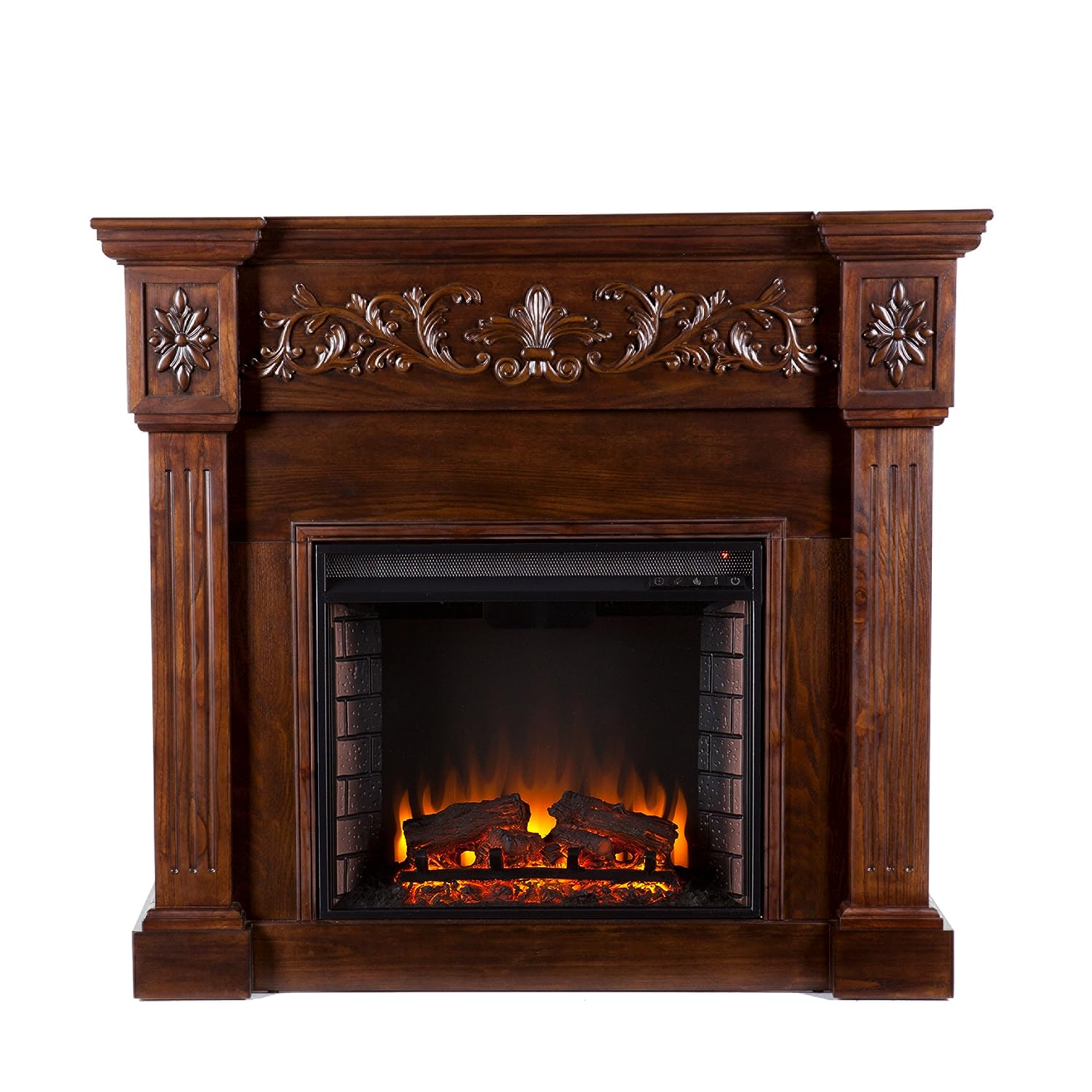 More Suggestions For An Electric Fireplace With A Mantel